Let’s get this out of the way: Zack Snyder is incredibly talented. “Dawn of the Dead,” “300,” “Watchmen,” “Legend of the Guardians”—the director is no stranger to sweeping epics and action-packed sagas. He’s very visual; he’s able to make painterly live-action or animated translations of beloved stories. 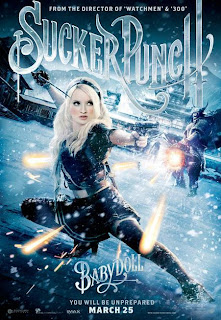 “Sucker Punch” is Snyder’s big, busty babe-fest, a bullet-riddled action flick with mostly unfazed heroines trouncing hordes of bad guys. But all the action happens in one young woman’s head. Babydoll (Emily Browning) is an imprisoned orphan who wishes to escape a heavily guarded asylum that doubles as a prestigious brothel. She meets potential comrades, prisoners forced to entertain for years, as well as their detestable jailer Blue (Oscar Isaac). In her fantastic visions, she gathers clues integral to her and her prisoner/patient friends’ escape. These video game-y monster-slaying scenarios happen while she does her supposedly sultry and mindblowing dance to Bjork’s “Army of Me.”

It starts intriguingly, and quite powerfully. Browning’s version of the Eurythmics’ “Sweet Dreams” hauntingly accompanies the protagonist’s dark and distressing introduction. A shift in realities is hinted at, and Babydoll finds herself part of a production where the girls are trained to perform for a variety of clients.

Babydoll’s initial trip to her personal Matrix is quirky; however, the grandiose quality of the fantasy fights dissipates after a while. The sequences unleash a barrage of bombastic imagery: Giant samurais with gatling guns! An ax-wielding Vanessa Hudgens! A really pissed dragon! An unending supply of ammunition! Slow-mo’d action poses!

But disappointingly, the film is nowhere as solid as Snyder’s previous works. It’s got some attractive scenes, fanboyishness gone nuts, for sure. There’s nothing wrong with that, but the story itself is problematic. The fortune cookie wisdom grates; sometimes it belabors the obvious, and other times it’s just silly. Its girl power attitude fizzles eventually, and the element of defiance just considerably weakens. Whatever philosophical self-help messages it’s trying to send, they ultimately end up as trite and flimsy clichés. It’s not even mindless fun—it’s just empty, joyless schlock.