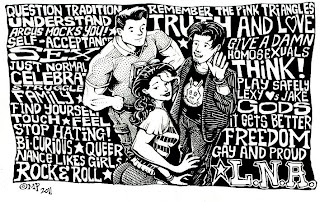 Before it was a graphic novel, “Lexy, Nance & Argus” was a comic strip that debuted ten years ago in Pulp, a local music magazine. Back in mid-2001, I pitched it to publisher Vernon Go and then-managing editor Annie Alejo. I was given two pages monthly, and the strip appeared in nine issues. Those 18 pages eventually became the first few chapters of the “Sex, Gods, Rock & Roll” one-shot, published in December of 2004.

I’m still very thankful for that opportunity. I’ve mentioned that a number of times already through the years in different blog entries. The comic strip led to a writing job at a magazine, which led to writing for a broadsheet, and so on. So as a commemoration of sorts, here are a few things that I remember fondly about its creation ten years ago.

The designs of the characters are a mix of influences; I wanted a simple, cartoony style, something that resembled the animated MTV shows of the time, but with a textured, daily comic strip feel to it. I was pleased with the final designs--distinct enough from each other, but still subject to visual change through clothes and hairstyles. They were easier to draw, but I could still control the details I wanted.

I used gray markers to give tonal value to those pages. The intensity varied from issue to issue; sometimes the gray tones translated as brown or yellow because of printing reasons, but I found the variations cool, nonetheless.

I photocopied and stapled all the parts together and gave them to comic creator friends. I once told Gerry Alanguilan that it was my “Wasted,” in the sense that doing it felt very cathartic. I was getting disillusioned with a lot of things prior to that point, and it was a chance to vent about what I thought was wrong with the world.

Doing it was also partly inspired by Carl Vergara’s “One Night in Purgatory,” which centered on a “forbidden” and conflicted relationship. I found myself creating characters that spoke to me, that had secret connections that fascinated me. I’ve always found secret, underlying connections between people fascinating. I often imagine this unseen web connecting real people through sex and sexuality, affection or attraction. So I wrote about these mostly carefree 20-somethings, whose shared “adventures” often led to self-discovery.

My other plans for Lexy, Nance, and Argus were realized through the comic book, three years later. It seems like yesterday, too, but so many things have happened since then. Looking at it now, there are parts that I wish I could change or improve. Still, I’m happy and always grateful that many people connected with it profoundly.

and i'm one of them. thanks, oliver.