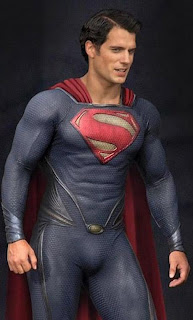 Superman’s new suit, finally revealed in this behind-the-scenes image from Comicvine. Yep, no red “underwear” like the recent Jim Lee redesign. This movie version looks contemporary enough, and Henry Cavill looks superhero-y handsome and hunky, so the change isn’t really a big deal. This actually looks more promising than that grim, dark promo pic that was released some weeks ago, the shadowy one that conveniently obscured the pants area. Now let’s cross our fingers that the film’s more entertaining than the less-than-action-packed 2006 reboot.

Speaking of ending eras, I just read the final issue of Flashpoint. Touching last few pages, uninteresting premise notwithstanding. It’s no secret that the DC Universe restarted again in that issue, its continuity rebooting anew just like it did during the history-altering events of Crisis, Zero Hour, and Infinite Crisis. I miss “my” already, the Secret Six book and characters most of all. It’s a little annoying that some of my favorite heroes and villains are gone for now or made over to look like ‘90s Image characters. But I still hope that the experiment succeeds and that the change gets more people to read comic books.

They should've added some red to the patterns on his sides, and made the buckle yellow to break up the monotony of the blue (the black patterns are too dark to do this).

As for the DCnU, I feel a bit sad, too, that an era ended. But I tend to think of rhis as the pre-Flashpoint DCU getting a happy ending, especially Wally West, who all but disappeared when Barry came back.

Hmm, the addition of red and yellow would probably improve it, yes.

Re: the DCU, yeah, I read a couple of the "final" issues; they were pretty bittersweet. I'm optimistic that the older universe'll be back, someday.