Action star Jason Statham previously starred in some competent but ultimately simple and time-killing movies, usually playing over-the-top, almost indestructible characters. In “Killer Elite,” based on the controversial book “The Feather Men,” he gets to portray Danny Bryce, an efficient assassin who retires for a year, but is persuaded into taking on another mission. Statham’s characteristically slam-bang action antihero has a more human side this time, his less-smug and more centered demeanor often belying his immensely dangerous capabilities. 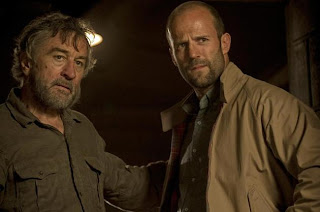 Danny belongs to a close-knit group of hitmen tasked to eliminate a target in . Danny leaves behind the team after that particular job, feeling guilty because their victim’s child witnessed their operation. He eventually starts life anew in , but his checkered past catches up with him a year later. His longtime ally Hunter (Robert DeNiro) is in the custody of an ailing sheik, and will only be freed once Danny’s newly assigned targets have been disposed of.

Supposedly based on actual events, “Killer Elite” intriguingly presents amoral, desensitizing figures, characters that don’t deserve any sympathy. But because most of them are humanized, or given different opportunities to illustrate that they might be more than just killing machines, the characters become appealingly enigmatic. That’s especially true in Danny’s case; he manages to keep his emotions compartmentalized and his “normal” and violent lives separate. But it’s only a matter of time before those things change.

The assassins are actively pursued by Spike Logan (Clive Owen), a determined and relentless ex-SAS agent who wants answers. Spike’s involvement keeps the killers on their toes, and he’s tough enough to engage Danny in fisticuffs.

Hard-boiled and gritty, the film has more than its share of blazing bullets and bloody encounters. Some action scenes could’ve been tighter, but most sequences work effectively.

DeNiro has a couple of solid scenes where he kicks serious butt, his elderly but fast-moving character no slouch at all in the gun-toting department. The actor also ably provides his character some welcome duality; Hunter is a father figure to Danny, their bond a strange but interesting dynamic that is emphasized a couple of times.

Statham looks more serious here than in previous movies; he’s stoic half the time, but gets to cut loose in his element. Statham’s experienced assassin character gets to inflict a lot of damage, no surprise, but the situations are less improbable this time. He gets to explore a different life with his girlfriend (Yvonne Strahovski), but the break is typically short-lived.

Owen delights with his presence, the versatile actor credibly pulling off the badass swagger while offering a clear contrast to the guns-for-hire. Also impressive is Dominic Purcell, almost unrecognizable with a Village People-esque moustache, and quite scary in one of “Killer Elite’s” darker moments.