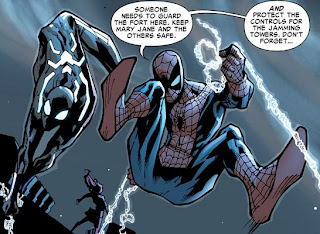 I knew it! The new, Tron-ish substitute costume gets worn by another character with spider powers in the last part of the Spider-Island arc. Also, I didn’t expect that old character to be back, but he’s better than ever. I don’t think he’ll be wearing the new costume for long, though. I’m assuming he’s the new Scarlet Spider being touted in some preview images.