Rob Schneider, ‘liberated’ from the critics

Actor-comedian Rob Schneider is 48, and his age and height are sometimes the butt of jokes in the new sitcom “Rob,” where his character has to deal with his new in-laws’ incessant scrutiny.

His real-life wife, Mexican TV producer Patricia Arce, suggested the premise for the new show. The real Rob relates to his fictional namesake’s cultural immersion, thanks to his nearly year-old marriage and growing up in a racially diverse family.

“I got the Filipinos on my mom’s side and the Jews on my dad’s side,” Schneider said during a recent phone interview. “So the jokes are really good on my dad’s side of the family; the food is fantastic on my mom’s side. And it was nice because they loved each other and didn’t care about their religions as much as they did for each other. That’s very charming. I grew up in a terrific family.”

He’s done eight episodes of the show and sees it appealing to families, regardless of nationality. “There’s always some relative who’s not getting enough attention or who’s got a drinking problem,” he said.

“There’s a lot of potential there. Also, being on CBS, I think we can eventually get this show to be like a Mexican ‘All in the Family’ and talk about what’s happening in . Hopefully, next season, that’s where we’re going.” 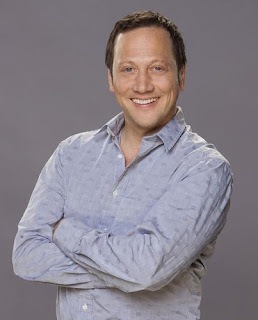 The show, Schneider admits, is far from perfect and has received its share of criticism, but he ignores that. “If you’re too politically correct, you run the risk of being boring,” he said. “I’ve never been a darling of the critics… I look at that as liberating. I don’t have to worry about pleasing any of them!”

Behind the scenes, he’s learning about cultural humor. “My wife has an incredible sense of humor,” said Schneider. “Talk  about politically incorrect, the jokes she tells me are horribly incorrect! It’s just about everything, but she says, ‘We can make fun of ourselves—but you better not!’”

The actor starred in “Deuce Bigalow” and “The Hot Chick,” among other comedies, and is adapting to the demands of his current TV project. “Honestly, TV shows are tougher,” he revealed. “I’m a perfectionist [but with TV], you don’t have the luxury. You’re taping a show and you’re done that night, that’s it. And not being in control of the whole process, that’s tough! I’m used to calling all the shots about everything. It’s a different animal here.”

“The all-out funniest person I’ve ever seen is John Cleese from ‘Monty Python.’ There are many great comedians but nobody has made me laugh harder than John. He was like 6’6” and all funny! Just the way his body moved, how loud, narcissistic, and crazy he was! ‘’ is the best sitcom, the best show on television that I’ve ever seen. You were crying so much you couldn’t breathe!”

Schneider says he writes down his ideas as soon as he wakes up, and gives advice to aspiring comedians: “You have to be sneaky about it. That’s why they call creativity ‘the merciless mistress of innovation.’ It doesn’t always come to you; you have to coax it sometimes.  At the end of the day, do what you love. Do what makes you laugh!”

“Rob” will air Sundays starting tonight at on BeTV (formerly AXN Beyond).
Posted by OLIVER at 4:06 AM