It’s “Julie & Julia,” but with spousal abuse! Well, kind of. The Madonna-directed “W./E.” connects two women separated by eras; Wally (Abbie Cornish) is fascinated with the story of Wallis Simpson (Andrea Riseborough), the married American that King Edward (James D’Arcy) surrendered the throne to be with. 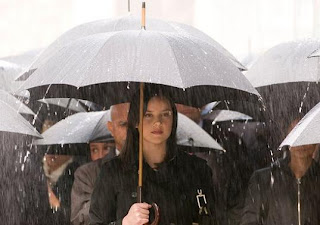 Wally imagines Wallis’ famous story while visiting an exhibit housing the historic family’s erstwhile valuables at Sotheby’s. The similarities in Wally and Wallis’ tales are easily made apparent through parallel scenes, pointing to unhappy lives with inadequate and/or abusive spouses.

“W./E.” adds dimension to the illicit romance and abdication angle that was prominently featured in “The King’s Speech.” Facing the enormity of her situation, Wallis accepts her new role and lives the rest of her days with the former king.

Wally, meanwhile, struggles to be happy, but all she’s left with is fantasizing about could’ve-beens while admiring Wallis’ old, exhibited keepsakes.

While it’s not exactly as intriguing as it should’ve been, the connected story of the two women does absorb periodically. The film is unnecessarily long, however; Madonna certainly knows what she wants to show, but that's not always what's needed.

Still, the film can be considered adequate. Actors Cornish, Riseborough and Oscar Isaac give competent performances, adding much-needed depth and tangibility to their quietly struggling and constricted—but ultimately unengaging—characters.