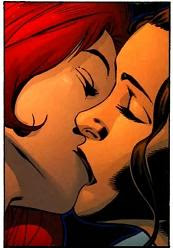 I’ve been reading DC Comics’ post-Infinite Crisis series 52, a weekly title that (woohoo!) doesn’t star the company’s big three—Superman, Batman, Wonder Woman—for a change. They still pop up every now and then but it’s generally focused on other characters, like the Question, Ralph Dibny (he’s powerless here), Booster Gold, Will Magnus, Black Adam, and Steel, to name a few. This yearlong series fills the gap between IC and the "One Year Later"-affected titles, and introduces new characters like Isis, Supernova, and a certain dark, er, knightess (more on her later).

It’s now on its thirtysomething-th week, a few of the arcs have been resolved, and some are fast reaching their conclusions. Written by top scribes Geoff Johns, Grant Morrison, Mark Waid and Keith Giffen—it’s hard to guess who wrote what, but the dialogue’s a giveaway sometimes—52 has its big dramatic moments and clever new mysteries. Spoilers ahead.

So far, some arcs have been enjoyable. The Black Marvel Family (Black Adam, Isis, Osiris, and their crocodile guy mascot) story has been intriguing, and it seems inevitable that this powerful new royal family will break up before the series ends. I don't know if they appeared in any of the OYL books. It feels like the team is headed for a tragic direction, and that's already begun with Osiris. I hope they survive, though. It’s doubtful, but one can hope.

Also, I find the Renee Montoya arc nicely handled. The lesbian ex-cop, a former alcoholic, is recruited by the Question, to look into ’s growing metahuman criminal activity. Batman’s away, but another caped crusader, Batwoman (conveniently Renee’s ex Kate Kane!), fills the void. It’s interesting that Renee’s being groomed to be a fighter—possibly a new Question?—as the "faceless" crimefighter is dying of lung cancer. She’s being trained by one of the DCU’s best martial artists, Richard Dragon. Can’t wait to see what the writers have in store for her.

Less than twenty issues to go.

Speaking of, I’m digging the show The L Word, which is about a group of lesbian and bisexual women friends living in . My fave of the bunch is the Shane character (I dunno yet who plays her). She’s the deep-voiced, rocker-looking one. She’s unpretentious, and Brian Kinney-esque, promiscuity-wise, but she seems like a kind person, if the first five eps of season one are any indication.

Oh, Mia Kirshner (Mandy the bisexual assassin from 24) is a cast member too. She’s bi here too, but she’s sweet and conflicted. Her aspiring writer character's torn between two lovers, characters played by Eric Mabius and Karina Lombardo. Wow. ;)

It’s almost February and my Christmas tree’s still up on the shelf. Hm, gotta put that away soon. Yeah, that means it’ll probably gather dust for about a week more.

Which reminds me, I finally read mystery writer Bob Ong’s absorbing, funny book about education, A B N K K B S N P L A Ko, two years after Peach Abubakar gave me a copy. She gave me another book two Christmases ago, also by the same author, I think, but I can’t find it. I’ve been rummaging through my stuff; I remember seeing it about two or so months ago. Gack, must buy another elcheapo plastic cabinet so I can re-organize and keep track of my things. Gotta go through the piles of paper clutter--brochures, reference material and old work-related notes and magazines—that have accumulated in the past few years.

Soon. Which probably means… whatever.