Australian pop singer-actress Holly Valance recognizes the unpredictability of her related careers, but she didn’t see herself becoming a judge on the fashion-reality contest “Ultimate Shopper.” 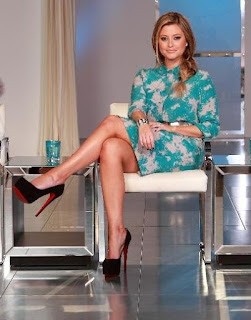 “I’m used to playing the role of someone else and I get to hide behind that character,” Valance, 29, said during a recent phone interview. “I was a little bit nervous because this is just me being me, which I’m not used to. But I ended up having lots of fun, which was a great surprise. I really enjoyed trying to help these people with their fashion sense …  so it was a good fit!”

Based in and , Valance previously appeared on American shows “Prison Break,” “Moonlight” and “.” The celebrity judge enthused that “Ultimate Shopper” is a seven-episode show that was taped in in a span of a few weeks.
She sometimes found it difficult to judge the contestants’ fashion choices, and often clashed on-cam with fellow judges, photographer Paul Hartnett and fashionista Brix Smith-Start.

“We argue … but we’re quite happy to argue amongst each other,” she said. “We know that that’s the point of fashion— it’s all subjective. It was difficult giving judgment, but if we can give it to [the competitors] in a semi-kind way, they might learn a thing or two and look better for it.”

Describing herself as a bit of a tomboy when she was much younger, Valance admitted that she’s very comfortable in jeans and boots, but wants to dress up and feel “girly” on occasion. She doesn’t consider herself a fashion expert, but is thankful for her evolving sense of style and taste.

“I didn’t realize I was so interested in it until I did this show, and then I realized I knew a lot more than I even thought I did about many brands and styles,” she expounded. “I would say I’m quite eclectic and very mood-driven.”

She counts Kim Kardashian, Victoria Beckham and Jessica Alba among her favorite style icons. “I think Kim is just beautiful and immaculately dressed at all times; is completely committed to her image; Jessica looks fantastic and effortlessly cool all the time,” she gushed.

Currently taking a break from her singing career, she revealed that she’s planning to write songs for other artists next year. In the meantime, she’s hoping for a second season of “Ultimate Shopper.”

She exclaimed: “I’d love to do more because I had a great time on this project and I surprised myself!”